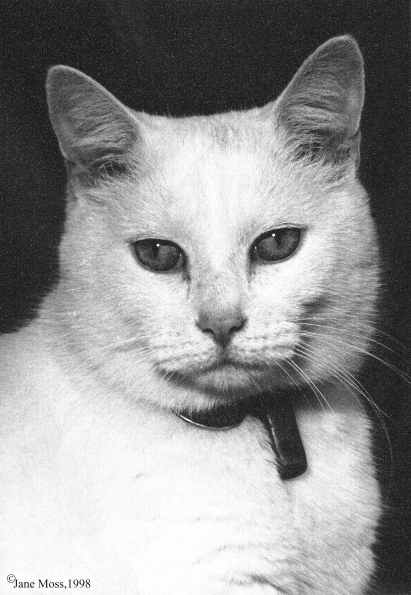 Hi! My name is Rutile and my profession is to manage and maintain the studio and the surrounding territories that Rebecca thinks is her own. I've been on this job since Easter day of 1993 when circumstances beyond my control transported me to this new job site some time in my second year on earth even though I had no collar and my belly was naked from a very recent operation that removed my primary task of increasing the world's population of my species.

My hu-mon name comes from my color which matches closely the color of Rebecca's favorite glaze colorant although my coat's actual color is that of Kaolin, pure white with a couple of tiny smoke colored smudges on my head and tail that can be matched by anyone simply by walking under a greasy motor vehicle. She was, however, accurate about my daily color as regular applications of beige dirt and dust renders it a perfect Rutile.

Although Rebecca and Beverly put much energy into finding my previous owners, it was not to be and now this is my place, first lording over the old studio and it's inhabitants. Although my size is more than ample and I project with two chins and some have even cruelly observed that when viewed from behind, I looks as if I am sitting on top of another feline.

Yet, I am no slouch. When I feel so moved, my speed will leave most hu-mons speechless and there are few cedars hereabouts who's uppermost branches I have yet to use as resting vantage points. My weight is because comfort is a very important part of my life. I also give the illusion that I sleep a high percentage of the time just to keep others off guard.

While the new studio space is beautiful, I have yet to be presented with sleeping accomodations that rival the exposed fiberglass insulation that remains in the demolition of the old space so when I am not to be found sleeping in the studio office chair, I can be found deep in the insulation. I do have my own key the the studio and a private entrance. The key became necessary when those ruffian racoons began using my private entrance to gain access and trashed the studio a few years back.

Bev and Rebecca caught one of those masked bandits and transported it to the greener pastures of the notorious Barton Creek Country club, but the door that replaced my old one requires me to wear this special device on my collar that unlocks the door as I approach. (They are not bright enough to figure out that it has stopped working because they installed my new entrance in a steel door) It also added an extra chore of sweeping the grounds of nails, screws, washers and other assorted metal filings and debris as I tour my domain.

My tolerance of all hu-mons is great and I have even allowed tiny ones to transport me about in the most awkward of grips, but I have learned to be powerful and dangerous in the presence of dog types and my senses have grown sharp enough to perceive their approach long before Rebecca has a clue.

Come visit me sometime and be sure to bring with you enough time to scratch long and gentle between and behind my ears and especially under my chin... and unlike the paranoia of most of my sisters, you may even rub and scratch my vast belly.

A white cat sat right in the middle of the driveway staring at me as I pulled into the studio on Easter morning.  I was coming to work in preparation for an upcoming show after enjoying a leisurely morning brunch.  I slowed and the cat reluctantly ambled to the edge of the drive then followed the car and again stood looking at me as I emerged.  Whose ugly little cat is that I wondered?  An hour later, she had drunk the bowl of milk I poured for her and I had discovered she had a spaying scar on her tummy where the fur was still growing back.  She wound herself in and around my ankles purring.  I saw that the gray smudges on her forehead and tail that I originally thought were grease spots from rubbing under a car were actually permanent charcoal hairs.  I wondered where this beautiful friendly creature had come from.  I had no suitable food for cats so off to the store for cat crunchies.

The next few days were spent searching for the white cat’s owner and falling in love.  On the third day when I came to work I found the gift of a squirrel beneath the slab roller.

There were no ads in the paper, no signs or word at any vets offices all over town.  Then an ad for a lost white cat and I had to make the call.  My heart was pounding but the man who answered told me his cat had no markings and no spaying scar and he’d already purchased a new cat.  I was doubly glad he wasn’t her owner if he could replace her that quickly.

Her name became Rutile.  Not the pure white kaolin she could have been, but the slightly impure form of titanium.  She quickly grew into her name by preferring to be a little scruffy and tinted with dust most of the time.  She also had the unfortunate type of rare fur that sheds constantly.  Unfortunate for me as I was destined to 20 years of battle with an excess of tumbling furballs in the studio.

Rutile was a content and laid back cat.  She never startled when I ran the obnoxious drill mixer that blended my glazes or when I dropped a tool on the floor or a wareboard tipped over.  Slams and loud noises didn’t bother her in the least.  She did love the cool slabs of clay I prepared and frequently napped on them leaving many a cat print in the moist clay, but only once in her 20 years of being studio queen did she break a piece.  I had laid out a table full of small plates to wax.  They were low almost flat, so when she carefully assessed the table with little cat neck stretches before leaping, she was unable to see that the table was covered with breakable objects.  When she landed on top her hind foot scooted out sending one plate to the floor.  She looked over her shoulder then at me apologetically and carefully, stepping between the plates jumped off the other side and walked out of the room.

When we built a new studio on the same property Rutile was reluctant to leave her home of many years.  Although she spent her days with me she continued to sleep in the insulation of the old studio, which was being torn apart to morph into our new home.  I made special beds, folded towels, bought catnip, but only when we had the ability to close her out of the house did she finally acquiesce and began to take up permanent residence in her new home.

Rutile was a great watch cat.  Always on the look out for wildlife she would growl to let me know of invading deer.  Dogs warranted a deeper growl, but coyotes or foxes brought super alert silence. Besides being my constant daily companion, she got plenty of extra attention from customers and visitors to the studio.  She was gentle and easy to love.  She allowed young children to handle her in their unknowing rough way even though she wasn’t used to having them around.  She taught me where the warmest and the coolest areas in the studio were by napping in those select spots during different times of the year.  One summer she disappeared for hours then whole afternoons.  I finally discovered her white tail dangling from atop the window air conditioner on the second story loft.  She was in her teens by then and still managed to climb a tree and make the precarious leap to the top of the air conditioner where she happily snoozed the afternoon away.  This remained her summer spot for several years.  The older she got the more she loved heat and even after she could no longer make the trek to the window unit she preferred to abandon the air conditioned studio in summers to sleep on the porch in the heat of the afternoon.

Rutile had a camp on the landing of the spiral staircase and she spent most of her time there in recent years.  Her hike up and down the steps became slower.  One day she fell from the top of the stairs.  She ran to a corner and lay panting.  I nervously scooped her up and rushed her to the vet.  She and I were both scared but she was perfectly OK.  That afternoon Bev and I built a blockade around the bottom of the stairs and created a beautiful welcoming new bed.  She got extra special treats that night, but it was time to abandon the sleeping loft.   The next morning I found her looking down at me in her usual loft position.  She had evidently worked most of the night untying and undoing the ropes and child gates to get to her spot.  OK, Rutile, if it means that much, what can I say.

Rutile got weaker, slept most of the time, but she still loved her treats, wasn’t ill, enjoyed pets.   I could look in her eyes and see her spirit.  “Are you still here?”  I used to call out each morning and she always was.

Then she couldn’t walk easily.  She didn’t climb the stairs.  I couldn’t see her when I looked in her eyes.  I wished more than anything that she would go to sleep and not wake up, but it didn’t happen.  When I laid her tiny body in her grave she looked more relaxed than she had in a long time.  A beautiful white cat and a purple iris and rosemary for remembrance.